To begin your practice of karate at the Redwood City dojo, all you need to do is register at the front desk and show up to class regularly.

After you have practiced for a few months, you might naturally like to know how you are progressing and ask if you can be graded.

Rank testing (kyu test) for SKA members is held each year in April and November. There are no fees to participate in kyu tests, but you must be a member of SKA in order to test for rank or take part in SKA activities outside Redwood YMCA.

New members pay $75 for SKA membership through the end of the year. Those who join in July or later receive $25 off their next year’s renewal. 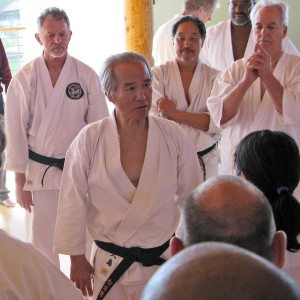 In addition to ranking, a most important benefit of being a member in SKA is the opportunity to attend practices with Tsutomu Ohshima, SKA’s founder and senior instructor. Mr. Ohshima usually leads several practices a year at Shotokan Ohshima Dojo in Santa Barbara which are open to beginners:

In addition, each year, Ohshima Sensei leads a practice for women, brown belts, and black belts. Thus, the number of times that you can practice with Sensei in a year are limited.

While Santa Barbara is a 4.5 hour drive from the San Jose area, consider that for other people around the world to attend a practice with Ohshima Sensei requires up to a 17 hour flight. If you had the opportunity to receive instruction from the pre-eminent artist/expert in any other field that you were studying, no distance would be too far to travel.

Those of us who have practiced for many years with Ohshima Sensei cannot adequately describe the benefits we have received from his instruction. Some of what we have experienced has been captured in a lecture that Ohshima Sensei gave at Waseda University in 2003: Lecture by Ohshima Sensei.

If you wish to further your practice of karate and join SKA, please talk to one of the senior members in the dojo.